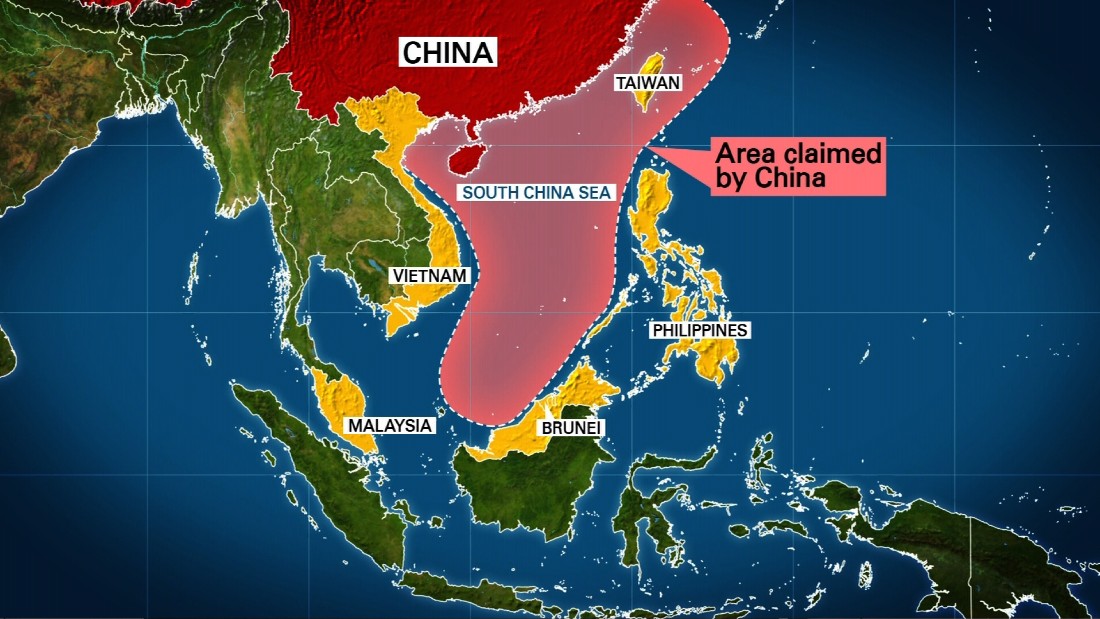 The Asian Maritime Transparency Initiative (AMTI) at Washington’s venerable Center for Strategic and International Studies has once again revealed its bellicose pro-US bias in its analysis. AMTI Director Gregory Poling and Research Associate Conor Cronin have posted an article in War on the Rocks lamenting the slow implementation of the US-Philippines Enhanced Defense Co-operation Agreement (EDCA).  https://warontherocks.com/2018/05/the-dangers-of-allowing-u-s-philippine-defense-cooperation-to-languish/

Poling and Cronin argue that “if implementation of the agreement continues at this rate, the national interests of both the Philippines and the United States will suffer.”  In particular, “the Philippines will likely lose its maritime rights in the South China Sea … “, and “the United States will be seen as a paper tiger unable to protect its allies or defend freedom of the seas.” This is a gross exaggeration of the situation and its likely outcome. More important it demonstrates a lack of appreciation for the fundamental factors at work.  Unfortunately this biased ‘expert’ opinion was ‘reported’ more or less word for word by The Inquirer. http://globalnation.inquirer.net/167047/breaking-ph-will-likely-lose-its-maritime-rights-in-spratlys-over-edca-delays-experts The main addition was to araphrase Philippines analyst Richard Eydarian’s critique that “Duterte should have threatened China by bringing back US forces to the Philippines.” Some of the same nationalists who are clamoring for the Philippines to take action against China would probably be leery of this proposal.

For 70 years the United States has dominated Southeast Asia with both hard and soft power– the capability to use economic or cultural influence to shape the preferences of others. Soft power underpins and makes possible robust hard power relationships.  Just a few years ago, US soft power in the region was strong.  Its hard (military) power is still dominant and may even grow but its soft power has declined both absolutely and relative to that of China.
The loss of soft power was vividly demonstrated by the reaction of the Philippines regarding the January 17 USS Hopper freedom of navigation operation (FONOP) near Scarborough Shoal. The Shoal is claimed by China, Taiwan and the Philippines. The US Navy guided-missile destroyer sailed through the 12 nautical mile territorial sea around the disputed feature. The Hopper’s transit was in innocent passage which is generally considered legal– if somewhat provocative. But China requires prior permission for such passage by warships and it objected.

The embarrassing truth is that the US soft power relationship with the Philippines and indeed, much of Southeast Asia is much shallower and more ephemeral vis a vis China than the U.S. thinks or wishes. Despite US enticement and pressure, US allies Australia, Japan and the Philippines have so far declined requests to join its FONOPs in the South China Sea against China’s claims. Indonesia has expressed disapproval over “power projection” there – presumably including that by the U.S. US relations with Thailand have not been close since the military coup there in 2014 and it seems to be leaning towards China. Malaysia/US relations have been brittle since the U.S. took a legal interest in then Prime Minister Najib Razak’s international financial dealings. They are unlikely to change much under the more nationalist Mahathir regime. Even staunch US strategic partner Singapore seems to be seeking a more neutral position between the U.S. and China.

This reality has been evolving for some time. But it clearly manifested itself last August when ASEAN leaders and their dialogue partners, including China and the U.S., held a series of key security meetings in the Philippines. The joint communiqué of the ASEAN Foreign Ministers Meeting strongly favored China’s preferences over its opponents within ASEAN as well as those of the U.S.  Some saw this as a new diplomatic low for the U.S. Indeed, according to Heydarian “…[it was] a slam dunk diplomatic victory for China.” http://news.abs-cbn.com/overseas/08/07/17/china-scores-diplomatic-victory-in-sea-row

Further, and contrary to Poling and Cronin’s dire warnings, the Philippines has not “lost its maritime rights in the South China Sea” and probably will not in the foreseeable future. Whether it can implement them or not is a question of capacity and of international politics. The arbitral panel’s ruling in its favor is now part of international law and is not likely to change easily or quickly. Moreover the Philippines has not surrendered its rights but simply put their implementation in abeyance for the time being. .” According to Duterte’s spokesman Harry Roque, “we are not abandoning, we are not ignoring, we are not setting aside the arbitral tribunal decision. He [Duterte] will deal with that arbitral award in due course. But now is not the right time”. For the time being Dutetre is trying to negotiate shared access to the resources. The result so far has been continued access to the fisheries and the possibility of ‘joint development’ of any oil and gas.
http://globalnation.inquirer.net/166258/duterte-address-ph-arbitral-victory-due-time-roque

Duterte foresaw the dire consequences of immediately pressing the issue and decided the real costs to the Philippines and the Filipino people who are already locked in grinding poverty would far outweigh the more theoretical benefits of doing so. He likely reckoned that the Philippines’ future lies in Asia, that the Philippines is militarily weak, that China is militarily and economically very powerful—and will only become more so, and that no country—including its ally the U.S. –is likely to physically come to its assistance against China. So he decided to seek a temporary compromise in which the Philippines can still have access to the resources. This is reality and not as the authors think it “should be”.

Realists—represented by the Duterte administration– see the situation as requiring deft hedging and the art of delay until a time more ripe for resolution of the issue within existing international law. They do not see the need for such recognition to be immediate and overt.

As Poling himself acknowledges elsewhere “the alternative [Philippines policy] would be to prepare for another years-long slog of rising military tensions, sporadic clashes, and diplomatic naming and shaming, with no guarantee of successful resolution.” https://www.philstar.com/headlines/2018/01/26/1781616/us-think-tank-expert-south-china-sea-diplomatic-breakthrough-unlikely I might add that would include no access to its resources and economic and political punishment by China. This is what the Duterte administration is trying to avoid.

Poling and Cronin claim that the EDCA agreement was meant to help address growing Chinese aggression in the South China Sea …” This is not at all clear from its text nor in its observance by the parties. To support their argument, the authors quote Article I of EDCA saying that the agreement is meant to ensure that both sides can meet their obligations under the 1951 Mutual Defense Treaty[MDT] to “maintain and develop their individual and collective capacity to resist armed attack.” https://www.scribd.com/document/220920869/Enhanced-Defense-Cooperation-Agreement
It goes on to say that EDCA will focus on improving interoperabililty… “addressing [for the Armed Forces of the Philippines] short-term capabilities gaps, promoting long-term modernization, and helping maintain and develop additional maritime security, maritime domain awareness, and humanitarian assistance and disaster relief capabilities”.

Despite Poling and Cronin’s implied assertion, it is not at all clear that this latter clause refers specifically to the China ‘threat’ in the South China Sea. It could mean internal insurgents in its volatile south. The U.S. did aid the Philippines in its struggle with rebels there. It does not commit the U.S. to fight the Philippines external battles for it and instead focuses on helping it build its capacity to defend itself. Moreover neither the EDCA nor the MDT for that matter commit the U.S. to fight the Philippines battles for it—only to ‘consider’ coming to its aid in the event of an actual  attack. And it is not clear that the U.S. will risk blood and treasure in a confrontation with China regarding vague and debatable claims to tiny islands in the South China Sea. The U.S. did not come kinetically to the Philippines aid against China under the MDT or EDCA even when requested, nor would it even declare that it would.

Poling and Cronin go on to label the democratically-elected Duterte as “famously anti-American” indicating that their main concern and motivation for their attacks on the Duterte administration’s decisions regarding the South China Sea may be to support US interests in the Philippines and the region. This is not the first time AMTI has bashed the Duterte administration and promoted US interests. Indeed, it seems to be part of a campaign to criticize Duterte and demonize China.

In an article in Foreign Affairs Poling recounts with regret the Philippines’ foreign policy pivot away from the U.S. and towards China under President Rodrigo Duterte, and criticizes China’s “coercion” and “militarization” of features in the South China Sea that it occupies. https://www.foreignaffairs.com/articles/china/2018-01-25/why-south-china-sea-diplomatic-breakthrough-unlikely He warns in a Rappler interview that China is not acting in good faith and that the Philippines must prepare for the worst. https://www.rappler.com/nation/195096-rappler-talk-csis-gregory-poling-west-philippine-sea-south-china-sea

In his Foreign Affairs article he reviews what he laments as the “tepid US response”. He then suggests that the Duterte government ”follow through on plans to allow upgrades at all five previously agreed-upon bases, reverse its decision to ban the storage of ammunition at them, and permit a regular schedule of U.S. combat aircraft rotations.” He also urges “the U.S. government to publicly state that its commitment to defend Philippine troops, ships, and planes from attack under Article V of the two countries’ MDT applies to contested waters and islands in the South China Sea”. Apparently it does not matter to him whether the Philippines now wants this assistance or not.

Poling goes on to criticize Duterte’s diffident response to China’s recent actions there.  Poling then derides his South China Sea policy as “rapprochement with Beijing—one in which Manila keeps quiet on points of disagreement in exchange for as yet unfulfilled promises of increased investment and a peaceful management of disputes”. In the Rappler interview, Poling characterized Duterte’s policy as “waving the white flag”. Poling should at least consider the possibility that Duterte is doing what he thinks is pragmatically in the best interest of the Philippines.

Philippine domestic politics are already racked and rent by a polarizing debate over its policy toward China’s claims in the South China Sea. AMTI and Poling’s repeated push for U.S. interests at this critical juncture is inappropriate for an objective think tank. If this is their predetermined thrust they should state so up front and not veil their analysis with the aura of objectivity and balance that is normally associated with professional policy analysis.

AMTI’s advice is certainly not welcome by the Philippines government. In August 2017, Philippine Foreign Secretary Alan Cayetano scolded those who criticized the presence of Chinese ships near Sandy Cay based on AMTI reports but did not criticize the presence of US warships in the disputed waters: “You have to realize that their [CSIS/AMTI] reason for being is to pursue the interests of the American people. We have to pursue Philippine interests.” I would add that the Philippines is rightfully wary of unsolicited advice regarding its relations with China from think tanks aligned with its former colonial master which is protecting its own interests and not necessarily those of the Philippines.

(Editor’s note: The view expressed in this article are not necessarily those of CenPEG.) 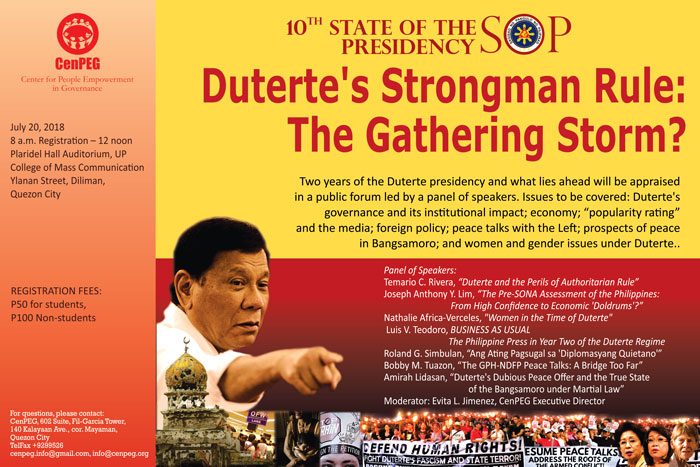 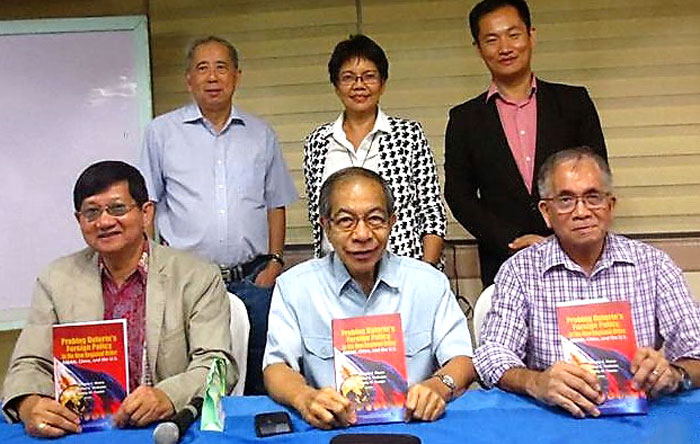